Since the time when humans were stalking animals in the bush all the way to Neil Armstrong’s walk on the moon, footprints have been the proof of physical presence. This has change lately.

Thus, the work aims at questioning how Information and Communications Technology are reshaping geography and our relation to space. 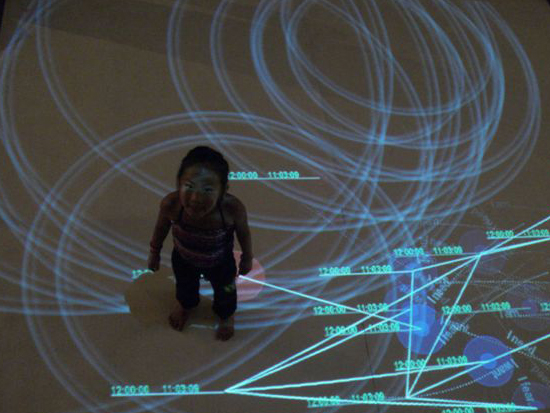 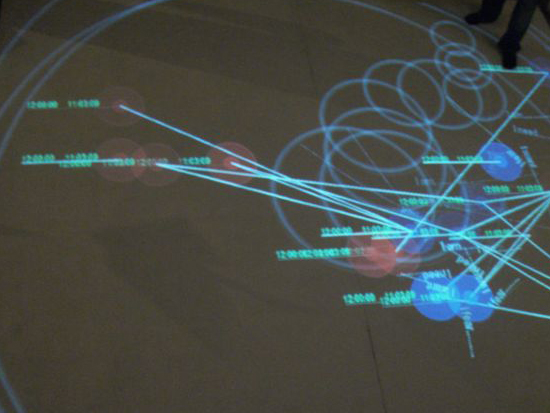 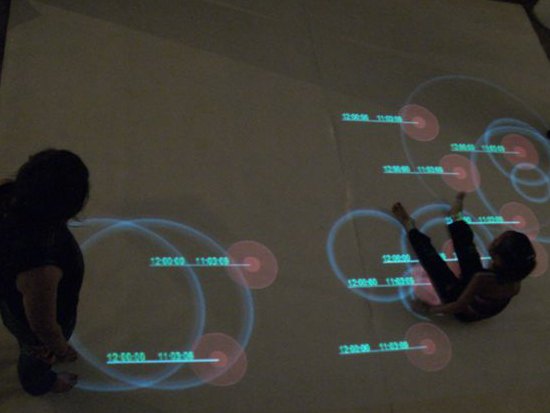 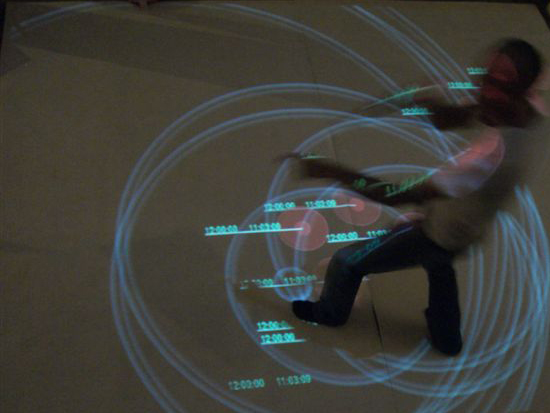 In Geography, interaction (I) between two cities is an inverse function of distance (D) amended by the population of these cities (P).

We therefore have this formula :

The exact formula is:

Where k is a constant to scale predictions up and down.
Where ß is the Friction of Distance.

The information age has put space at the heart of new debates. While some talk about “The End of Geography” (O’Brien, economist, futurist and author) or the “The Death of Distance » (Cairncross, economist, journalist and academic), others argue that communication technologies redefines our relations to space (Bidou, sociologist), or explain that space is now made of layers (Martin Jourdenais and Pierre Desrochers, sociologist): the Traditional, the Cyberspace (Gibson, cyberpunk writer) and the Space of Flows (Castells, sociologist).

The installation can be considered as a metaphor of a Space of Flow. Indeed, Castells explains that it links up distant locales around shared functions and meanings on the basis of electronic circuits and fast transportation corridors, while isolating and subduing the logic of experience embodied in the Space of Places (The Space of Places being the “Traditional Space”). He also describes it as enabling synchronistic and real-time interaction without physical proximity, a none passive space as it evolves with time. This space implies a new power model, it also generates new expression of identity (via avatars).

About Hyperreality, cultural theorist Baudrillard describes it as simulation of a real without real origin. Borrowing from Carroll the example of a society whose cartographers create a map so detailed that it covers the very things it was designed to represent, and pushing the idea further, he argues that the territory no longer precedes the map, nor does it survive it, but that it is actually the map that precedes the territory. « HyperTerritory – Frictions of distance’s » installations are (the none exclusive…) pieces of an Hyperreal territory under construction.

Songdo, the $25 billions investment project in South Korea is one of them. But actually, the presence and extensive integration of mobile phone, RFID tags, QR codes, Bluetooth, NFC… has the potential to transform any city into a ubiquitous city. In the U-city, all information systems are linked. For instance, if you through a can in a recycling bin, your bank account is automatically credited, thus rewarding your positive behavior towards the environment. Effective and convenient. But in terms of privacy, the pervasive city could become a powerful mean of control, just like Oceania described in Orwell’s novel 1984.

The project’s origin is based on the concept of an HyperTerritory characterized by ubiquitous footprints. It was proposed by Philippe Chollet. Initial Research and Interaction Design was then done in collaboration with Che-Guevara John. It also involved Chris Lane (London Metropolitan University) and Gauthaman Ravindran (London Metropolitan University) in the production phase. Che-Guevara John did the visuals and the processing programming, Gauthaman Ravindran did the database/MySql programming whilst Chris Lane largely contributed in planning and funding.

The installations were exhibited simultaneously at Iniva (Institute of International Visual Arts in London / UK) and at the CCF (French Cultural Centre in Phnom Penh / Cambodia) from March 11 to April 25 2009.